Fault Tolerance is the property that enables a system to continue operating properly in the event of the failure of some of its components. If its operating quality decreases at all, the decrease is proportional to the severity of the failure, as compared to a naively-designed system in which even a small failure can cause total breakdown. 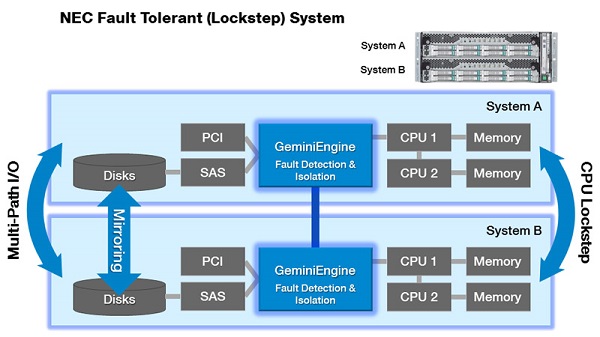 NEC’s FT servers are designed with innovative technology that enables continuous availability for a solution with up to 99.999% system uptime while providing data integrity and exceptional performance.

The heart of the dual-modular redundancy architecture for the FT server is its GeminiEngine™ chipset, a feature specially engineered to synchronize redundant components and prevent CPU performance degradation due to hardware redundancy control. The GeminiEngine feature enables "lockstep" processing, allowing the redundant components to process the same instructions simultaneously, and thereby eliminating potential failure points for continuous processing.

The Rapid Disk Resync (RDR) is a disk synchronization technology that enables the disks to be resynchronized in a short period of time when their mirror has been broken due to a system failure or system maintenance. The RDR resumes disk mirroring by performing quick copies of only data changes, rather than entire disk data, thereby minimizing the time that the system runs with non-redundant disk system.